I went in the shed to get my bike and found a snake eating a toad. I don't know who was more startled, I jumped back but he could not move around much. I grabbed my camera and took a few pictures over an hour or so.

I'm not a fan of gory scenes and debated wether I should post them or not. I found it interesting to see how the snakes around "the compound" as we refer to our home, make their living, so I thought some people would also be interested.

By this time the toad was not moving. I found out that one of the first thing a toad does if he's caught by a snake, is to inflate himself as large as possible. This toad has done this and looks huge.

If you are interested there are several articles on the web. Here is a link to the Wikipedia Garter Snake article

The snake can eat such a large toad because he can unhook his lower jaw and gradually open his mouth. Once he manages to get more of the toad in his mouth he can press on the middle and deflate the toad. After that eating is much faster.

The toad was fairly limp so I hope he was not conscious. 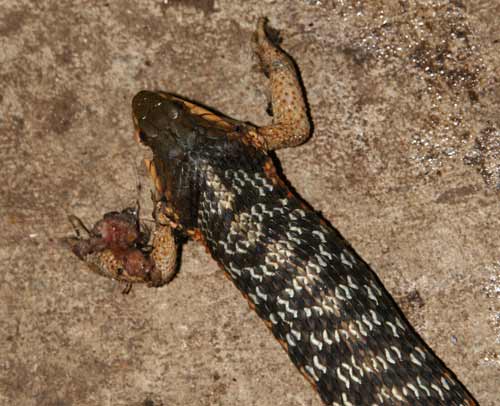 Just a few minutes later the toad is almost all gone. The snake is struggling to get the legs in because they are sticking out quite a lot. This did not take long and soon the toad was completely eaten.

All this drama is happening in slow motion. I guess the catch must have been fast but the eating is very slow.

There are quite a large number of these snakes around the compound. They seem completely harmless and the cats are not interested, which is a good thing.

Apparently their diet consists of worms, slugs, bugs and the occasional frog, mouse or toad. There are millions of worms so that could be their main food. They are carnivorous and adapt to whatever is around. 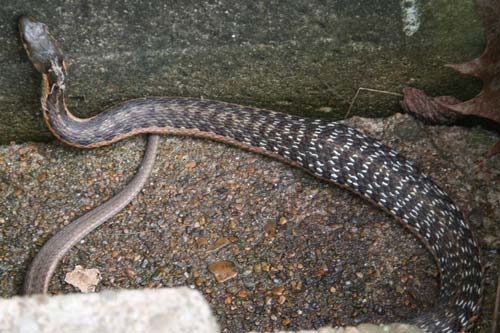 After his meal he was pretty slow and fat.

The "bump" also moved towards the back. I expect he is going to find a nice quiet spot and digest for a while. I've noticed that individual snakes keep to a specific area. I don't know if they defend a territory but they stay put and go back to their home.

Most of the garter snakes around the compound are quite a lot browner than this one. He was quite vivid brown and reddish with an almost tiled pattern on his back, very handsome.

These snakes hang out around my garden and I guess they eat slugs. Snakes are part of my pest control strategies so I try and encourage them. When I mow the lawn I go very slowly in order to allow them to get out of the way.

Books about Snakes and Amphibians