I have a Virginia Opossum (Didelphis virginiana) Living Near My House 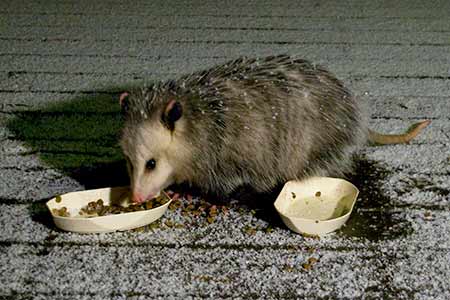 I moved near Fort Erie, in the Niagara Region. My home is a few minutes from Lake Erie where I sail.

When I moved I trapped my 2 remaining feral cats and settled them in my new home. One evening when the mice were holding races in my ceiling I couldn't sleep and went to look at the porch were I have placed my cat houses and where I feed my 2 ferals. To my surprise there was an Opossum eating.

He was not the first Opossum I had run across. Once I had seen one as road kill in a farm road near Oakville Ontario. Another one had come to my cat feeder in Toronto for a few days. A third one had madly run across my path, when I was cycling at night on a wild windy fall day. He had looked absolutely demented.

My daughter in Toronto had called me one day saying she had a crazy looking rat on her porch and what should she do. I reassured her that they were quite peaceful in spite of the odd untidy look. They are more likely to play dead than to attack. My sister in Guelph had an Opossum living in her basement for a short while eating her cat's food. He came and went through the cat door which opened through a basement window.

We are at the Northern limit of the Opossum territory. All the ones I have seen have all had somewhat mangy looking ears because they get frostbitten in Winter. 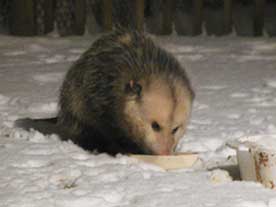 I photographed this little guy at my Toronto home. He hissed in an impressive way and showed alot of teeth but otherwise did not seem particularly aggressive.

The 2 opossum I have seen up close were quite different in size. One was as high as the large cat I have and stockier. The other opossum was much smaller. They look like a big rat but they don't have rat teeth. They have a mouthful of too many sharp little white teeth. 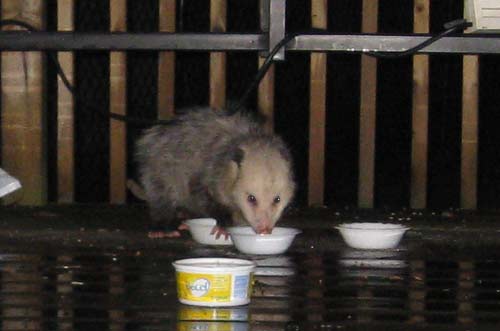 He hissed once, made a funny clacking noise with his mouth and went on eating. He was not even particularly afraid when I opened the door to take a flash photo.

The fur is said to be soft but it looks unkempt and disheveled. This little guy had a very pink nose and a lot of pink toes all sticking out. Wikipedia claims that they have an opposable thumb on their hind leg and a prehensile tail. I don't think he can dangle from his tail but he can grasp a branch with it. My photo does not show how long the snout is but it is quite long and pointy.

They are the only marsupials in North America and the females give birth after only a couple of weeks of gestation. The babies crawl into the pouch, latch on to a teat and stay there for a few months until they are large enough to face the world.

They have a short life span, only a couple of years in the wild, maybe 4 in captivity. 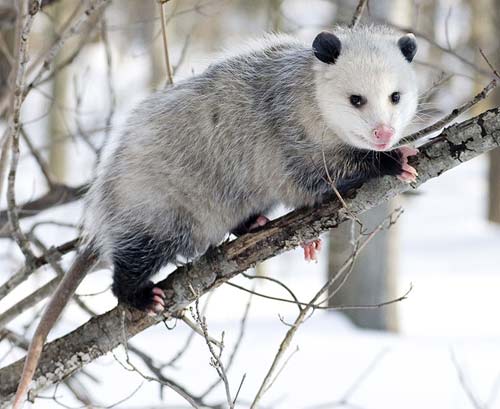 This lovely photo was taken by Cody Pope and made available on Wikimedia.

The Opossums are said to be Omnivorous, like us, racoons and bears. I've only seen them eat catfood though. They prefer the wet kind but will crunch kibble when this is all eaten. 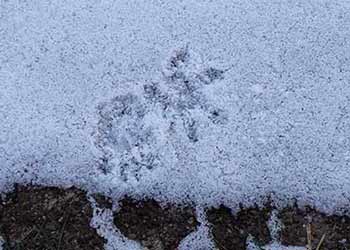 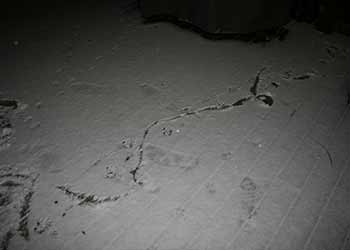 Opossums don't hibernate but like other animals, will stay in their hiding spot in really bad cold.

They have distinctive tracks. Most opossum will drag the tip of their tail and make a zig-zag trail in the snow going left and right. Their little paw prints are also very easy to recognize. Their 5 toes are spread wide apart.

Check out my page on How to recognize opossum tracks. 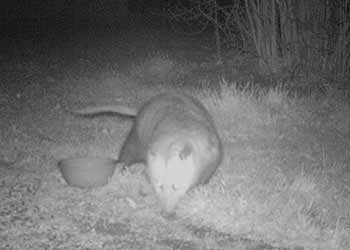 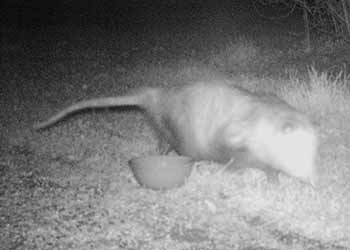 In Southern Ontario, Opossums are becoming more common having been spotted North of Toronto. It is still quite surprising to run across one though. I'm glad I've met this odd little animal.

I occasionally set up the critter cam and they often show up looking for fallen seed under the bird feeder. 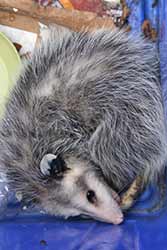 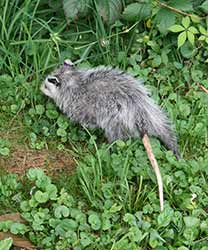 Opossums are very fond of ticks and are really successful at ridding themselves and their area of them. This is great news for Lyme disease areas. Here is an article on how opossums are good for ridding an area of ticks. They are one of the many carriers of typhus bacteria though.

Note: I have now been living here for a couple of years and the opossums have gotten more used to us. They visit most nights around 1 am. They are timid but seem to hold their own. It's not unusual to have a couple of skunks, a raccoon and an oppossum all checking out the dropped bird seed at the same time.

[HOME] [Email Christine]
Article from The Cary Institute of Ecosystem Studies on Opossum. They write that an opossum can eat 5000 ticks in a season. Impressive.

2 Articles from The National Wildlife Federation on Opossums and Giving Opossums a break because they eat lots of ticks.


From the "What's awake" series for kids: