Rowers and in particular competitive rowers have always tried to improve efficiency. Many modifications to traditional rowing crafts have been tried.

Competition rowing boats have been lengthened and made narrower and lower with great success but the modern rowing shells are quite tippy and sensitive to waves. Rowers have tried putting footrests and that gives the rower something to push against. Sliding seats have been a great success in improving the efficiency of boats because they allow the rower to use powerful leg muscles to aid in pushing the oars. Before sliding seats were developed some rowers would grease the seats and slide back and forth. Rowers have also tried to modify the oar locks so that they move instead of the seat this also worked very well.

What is a Sliding Rigger

Riggers is the name competitive sculling boats and shells use for the oarlock assembly. In narrow boats it often sticks out from the gunnel to improve the position of the oarlocks.

In order to allow a rower to use the wonderful strong leg muscles, the oarlocks are sometimes placed on a sliding carriage linked to the footrests. By pushing on the footrests the rower can use leg as well as arm power. The oarlocks slide back and forward while the rower stays in one spot not shifting the major mass of his body. This is unlike the moving seat where the riggers and oarlocks stay in one position and the seat goes forward and backwards.

Why not use Sliding Seats?

Sliding seats are the norm and widely used. They have a disadvantage however. Because the mass of the rower moves forwards and backwards the boat has a tendency to bob up and down. It is said to dolphin or hobby horse. The longer and heavier the boat is, the smaller the bobbing is. In shorter boats the advantage of using a sliding seat can be offset by the wasted bobbing motion.

The video shows a 1982 competition where the rowers were using sliding riggers. It's in French, but has good images. At one point they are discussing the boat and claim that they are faster. They also mention that there will shortly be a ruling about the sliding riggers. We know they were banned from competition shortly after.

It's not clear to me exactly why but I don't think anyone uses them. One argument I heard is that although the rowers go faster the order of the winning boats does not change. Everyone goes faster but the same guys win. (as long as they are all using the same kind of boat) Now sliding riggers are used by serious rowing amateurs who prefer to have shorter boats. Shorter boats are easier to store, move, and transport, as well as usually being cheaper to purchase.

Another advantage of using a sliding rigger rather than a sliding seat, is the stability it provides. This is particularly useful when the water is rougher. It's easier to balance when you have a stable position rather than a movable centre of gravity.

Rowing with sliding seats on left clearly shows the boats bobbing motion. This is from the Beijing Olympics. Still blindingly fast though!

How Long have Sliding Oarlocks Been Around?

Michael Davis of Portland Maine applied for a patent for a sliding rigger/foot-board with fixed sea in 1877. So the idea has been around for a long time.

There are many kits available for retrofit of SUP (Stand Up Paddle Boards) to allow them to be rowed. Since most paddleboards are quite short, the sliding rigger makes good sense and helps avoid bouncing, which happens when sliding seats are put on short boats.

RUM International has a Sliding Rigger for different types of boats. They are located in Florida. Their unit sells for about 1000 US. It's worth having a look at their website. They have a nice explanation on the principle of the sliding rigger.

Alden Rowing from US. have another version of a sliding rigger. Their unit can be adapted for mounting on canoes and other narrow beam boats. It is listed at about 700 US.

NOTE: Sadly, there appears to be a number of Alden unsatisfied customers. Link to complaintboard.com. It appears the mechanisms are well made and perform as expected but the business side of the Piantedosi operation is failing to ship and respond to inquiries and complaints. As of 2018, it has a D- Better Business Bureau Standing. Caveat Emptor.

I think one of the ways of getting a sliding rigger might well be to adapt a unit intended for paddle boards.

One fact that all the manufacturers mention is the need for a good seat. Not only is there more pressure with the danger of blisters and irritations, but it is also possible to slide right off the seat if it is not cupped or slightly angled to retain the butt firmly in place as you row, pushing against the footrest (and the rigger mechanism).

The Row Surfer allows you to add a rowing rig onto a canoe, kayak, board or any other suitable craft. They are located in The Netherlands, Amsterdam.

Wander through their nice website with lots of information.

Xeno Muller Rowboard is equipped with a sliding rigger.

It's not clear if the rowing assembly can be purchased separately but it's worth a look.

At the high end of the spectrum, Volans Sport UK offers lovely rowing skiffs which are equipped with sliding riggers. Their boats are designed to be usable in open water where waves would make a sliding seat rowing set up too unstable.

Many people have experimented with making sliding rigger apparatus. Some have started from scratch and some have modified existing sliding seat apparatus. 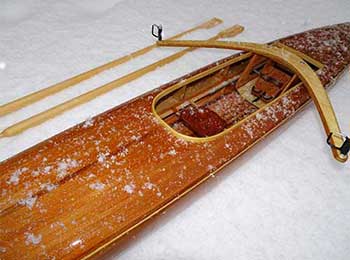 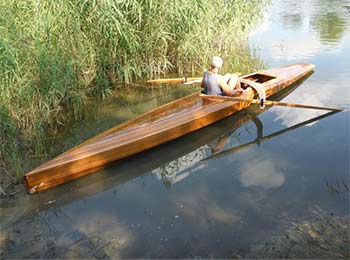 The boat is based on a design by Jurgen Sass with plans developed and drawn by Ruedi Anneler after a great deal of problem solving and experimenting. It's a truly beautiful wood strip rowing boat.

The photos show a model he built to sort out a few problems and the actual boat.

He reports that the boat is stable and well behaved. He documented his process very well on his website and also in Oeko Travel.org Set aside a couple of hours, sit down with a warm drink, and enjoy.

The first link also has a link to a video of the boat being rowed.

You will have to get Mr. Google to translate the pages for you. Some of the wording is at best mysterious but there is no mistaking the images.

Ruedi also documented and made plans for sculling oars. This came about from a thread started by Rick Thompson who described his process. Free plans for lovely wood sculling oars available on his website. PDF file.

Not available commercially but clever is the 2 pontoon, ROCAT designed in the UK. It has the advantage of being very stable.

Clovelly Sculls UK, used a Rigger system. Their website has several videos of their system and boat. They describe their boat as "A sporty single scull for rowing on open water". They appear to be out of business. Their website claims "Production has been temporarily suspended". Worth a look though.

Several people have worked on the design and some fascinating prototypes have been made. Here are a couple.

Simon Farthing has designed a leg and arm rowing system that also has the advantage of letting the rower face forward. Here are a Youtube video of his forward facing rowing system including leg push. I think his position is a bit too high but it's really interesting.

Ron Rantilla has a wonderful rowing system. that also uses arms and legs AND lets you face forward. His website is here Front Rower and his set up can be purchased for use in your own boat. It has gotten good reviews.

email me if you find mistakes, I'll fix them and we'll all benefit: Christine

I present this page for information only. I don't endorse anyone and don't guarantee that they are good. They might be very good, I just don't know.