Flea is the common general name for wingless insects of the order Siphonaptera with mouthparts adapted for piercing skin and sucking blood. Fleas are external parasites, living by ingesting the blood of birds and mammals including bats and humans. Fleas exist worldwide and upwards of 2,200 species have been identified.

Fleas go back a long time. There even exists fossil fleas!

The Cat flea is: Ctenocephalides felis

The cat flea's primary host is the domestic cat, but this is also the primary flea infesting dogs in most of the world. The cat flea can also maintain its life cycle on other carnivores and on the Virginia opossum.

Humans can be bitten but cannot be infested, so a population of cat fleas cannot be sustained by humans ... usually. An experiment showed that a flea had to feed continually on human blood for 12 consecutive hours to produce eggs that could hatch. Not likely but possible.

Some people have strong reactions to flea bites, and the flea can carry nasty bugs of its own. This is mostly harmless to people with normal health but can be more dangerous to people with compromised immune systems. 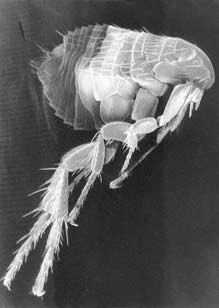 Adult fleas are wingless and have hard flattened sides. Colour ranges from reddish brown to black. Fleas have many backward pointing bristles which help them move in the host's fur. Large back legs make the flea a great jumper and quick mover in fur.

For more detail on how what fleas look like, here is my web page on what fleas, eggs, larvae and pupa look like

Life Cycle of the Flea

Although the female flea lays her eggs on the host, the eggs dry and slip out of the fur and fall onto the cat's bed or resting area. The flea eggs hatch after an incubation period of 2 to 21 days. Flea larvae do not hatch on the cat. 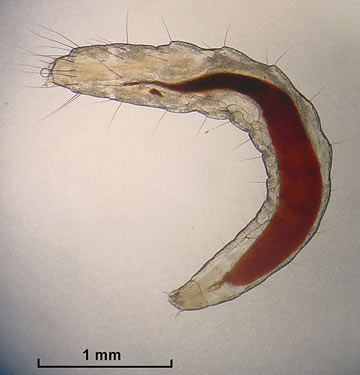 The eggs hatch into larvae which hide from light. This means they will burrow into a carpet or deep in the cat's bed. During this stage the flea larvae eat organic matter and in particular feed on flea dirt, the adult flea fecal matter that falls out of the cat's coat. If you ruffle a cat's coat over a white paper, the black spots that drop down of a flea infested cat is known as flea dirt.

The flea larvae then spin a cocoon, that sticks to surrounding dirt and is camouflaged. The flea then pupates quietly in its cocoon. In order to hatch the young flea usually needs the warmth, availability of food, vibrations, carbon dioxide and humidity of a potential host to trigger emergence from the pupal stage. The cat flea has been extensively studied. The pupal stage can be as short as 4 days. In unfavourable conditions, the flea can stay in its cocoon for several months.

Within 48 hours of emerging the young flea starts feeding. Details on the Life Cycle of the Cat Flea

The cat flea is not a fussy eater and will bite dogs, skunks, rabbits, raccoons, squirrels, foxes, weasels, calves, and humans as well as many other animals.

A female flea can produce about 40 eggs a day and lives up to a year.

Where does a cat get fleas?

Fleas are picked up from bedding and resting spots where cats normally lay. Anywhere an animals with fleas has been is a potential spot of infection. Since cat fleas also infect dogs and raccoons and several other animals, a cat can pick up fleas anywhere these animals have been.

There are more fleas during the summer than during the winter. Higher summer temperatures and humidity are better for flea growth. Preferred conditions are 27C-32C with 75-92% relative humidity. 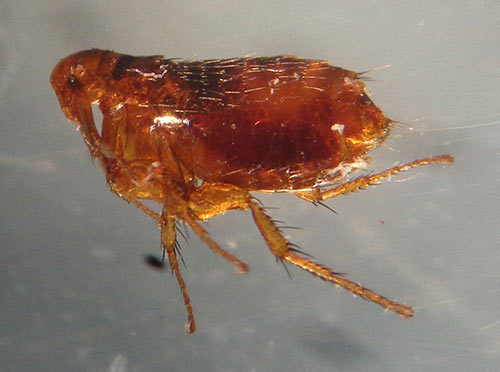 Can a cat fight fleas

An actively grooming cat can reduce the adult flea population it carries by 50%. Go Kitty!

Younger cats are more likely to have larger flea loads than older cats. It's not clear if the older can has a acquired resistance OR if their grooming habits are better.

Older or weak and sick animals are not so good at grooming and can have more fleas.

A few fleas are not particularly harmful in a healthy adult. However it's not very comfortable to be itchy and a small flea population can grow quickly. Fleas should be controlled.

Fleas can attack humans and can carry some nasty bugs

Sometimes fleas cause allergic reactions on the host cat. This is called flea allergy dermatitis. See Allergies in Cats page These cats will have scabby bumps on their skin.

Large infestations, particularly on small animals can cause dehydration or severe anemia.

Over grooming and scratching can result in scabs, hair loss and skin irritation and infections. Fleas can also carry and transmit disease

Fleas can transmit some diseases and parasites

Dipylidium caninum, is a tapeworm that infects organisms afflicted with fleas, including dogs, cats, and humans, especially children.

Eggs are passed in the host's feces and ingested by fleas. The flea then needs to be ingested by another mammal after the tapeworm larvae partially develop. Ctenocephalides felis, the cat flea can spread this tapeworm if they have access to the fecal matter. In order to be infected a human has to ingest an infected flea.

This is a skin condition caused by flea bites including Ctenocephalides felis, the cat flea. Symptoms include skin irritation, swelling. In some people the reaction can cause ulcers of the mouth, soreness and restlessness. More rarely condition can spread to the lymph system and nervous system and become quite serious.

(Bartonella) can be transmitted by fleas.

How do I know if my cat has fleas?

For a more detailed article on how to check for fleas on a cat, here is my flea checking page.

To be successful flea control has to be done on 2 fronts. The cat and his bed and sleeping spots

There is more need for flea control in the warmer months. Because of the ability of the flea to slow down its development in poor conditions, a flea infestation can persist for several months with no animal present.

My page on Treating Fleas on Cats, and How to get rid of fleas in the house

University of Kentucky has a good article on flea control. They have links for products available to control fleas.

Different insecticides are licensed in different geographic areas. Check with your vet, or with the the ministry of Agriculture or with Public Health departments for what is recommended in your area.

Read my page on how to control and kill fleas on cats. It has detailed information on flea control

Images for this article are from Wikipedia

This article is provided for information only. It is not to be used instead of consulting a VET. If your kitty is sick get some help.

What do cat fleas, eggs and larva look like Life cycle of the cat flea is complex. Understanding this life cycle makes it easier to kill and control cat fleas Does your cat have fleas? This is how you can check. Natural flea control for cat fleas How to kill and control fleas on cat There are effective ways of killing fleas and getting rid of the eggs and larvae
Bayer Advantage controls fleas and tapeworm in cats. Kills through contact, no biting. 9 pounds and more.

Frontline Plus for Cats and Kittens (1.5 pounds and over) Flea and Tick Treatment, 6 Doses

If you prefer pills, Cap Guard works for fleas and are also labeled for ticks.

Cornell University, flea article Wikipedia's entry fleas Veterinary Partner has a link to flea treatment products. link is pdf file University of California has a good article on flea control including photos to show what a flea egg looks like and photo of flea larva. Cat World Australia flea page

Some Books about Cat Health and Veterinary References

Cat Behaviour can be Puzzling, here are some books that might help

Cat Behaviourist helps you understand the complex field of cat behaviour. She has a good reputation.
Think Like a Cat: How to Raise a Well-Adjusted Cat--Not a Sour Puss

How to get rid of cat urine smell Books about cats For reference and amusement Cat Ear Mites are a common problem See what a ear mite looks like. Allergies in Cats Hairballs in Cats Cat Gardens Plants Cats Like My Cats Cats at Work Cat Navigation Page Feline Leukemia

Grow some catnip or grass for your cat