Dredging at my Boat Club TS&CC

Over the years we have had silting up of our harbour and combined with a particularly low water level of Lake Ontario many of our boats have been touching bottom.

Normal and lower water level at the East Dock(It got even lower by about 1 foot last fall). There are many explanations for the low level of Lake Ontario. One is certainly that the snowfall last winter was way below the usual. Water level has fluctuated and in dry years it can go down quite a lot. When there is a lot of snow and rain then water levels go up.

Dredging is very expensive and there are severe regulations (I'm happy to say) in place to protect fish and other marine life. We also had to test the sediment to make sure it was not toxic, which it is not! We are in March and running against the clock to avoid the start of fish spawning season.

My Boat Club managed to get the money together and budget approval, plus all the permits. Here are a few photos of the process. 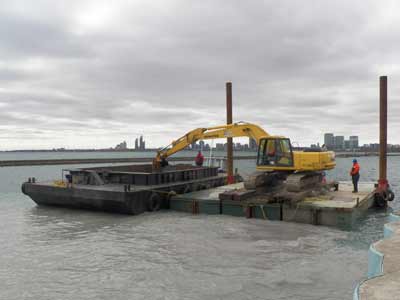 The equipment is simple. A barge to carry the sediment, a platform to support the shovel, a tugboat to move things around, and a support boat mostly to carry people around and move quickly. 4 Men are working on this site.

The shovel platform is made of several separate floats attached together. The 2 pillars on either side are lowered to the bottom to anchor the platform in place. The shovel sits on 2 wooden tracks made from large pieces of lumber. The dredging shovel moves forward and back on the track.

The tugboat helps move the barge and platform around. Here the barge has just been emptied and the tug is pushing it to get a new load. 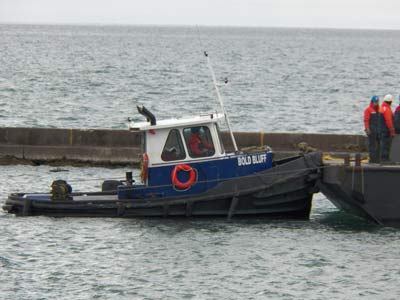 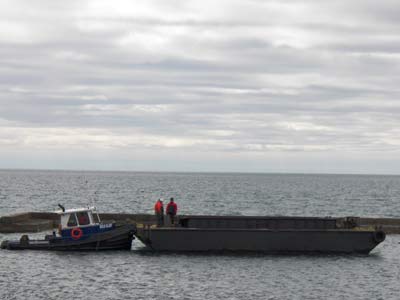 In many places there was no silt at all but rather shale and very hard material that made for slow digging.

We had not enough money to dredge the whole club and concentrated around the docks, main channel and in one spot that seems to have a sandbank. Because my Tanzer 22 only draws about 3.5 feet I was not seriously affected. Many of the clubs around Toronto had problems in the fall when the water is at the lowest.

If you look at the back under the arm of the shovel you can see a winch control area. This is where the operator sits when he is lifting and lowering the pillars that anchor the platform. When they want to move the shovel's platform the winch lifts the pillars and the tugboat pushes the platform in the new position. The pillars are then lowered down to the bottom and stop the platform from moving as the shovels scrapes the bottom. 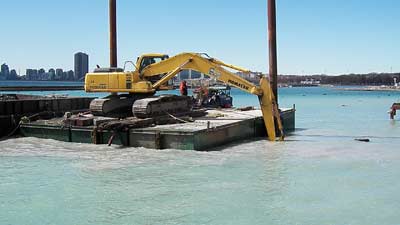 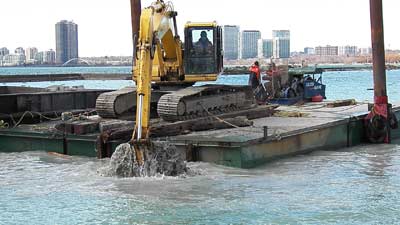 I expected the water to be dreadfully muddy but it clears quite fast. I think this is because we are not really dredging much clay but rather it's more the consistancy of shale with a thin layer of clay-silt on top. That's why each shovel full is hard to bring up and not full at all.

The water was not terribly clear anyway because we had some quite strong winds last week. 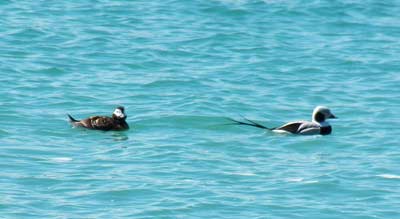 A pair of long tailed ducks swim by. They have been diving in the area. I think they eat mollusks. That's what Wikipedia says. There are lots of zebra mussels around.