Process I went through Deciding What Boat to Build, I Chose the CLC Skerry 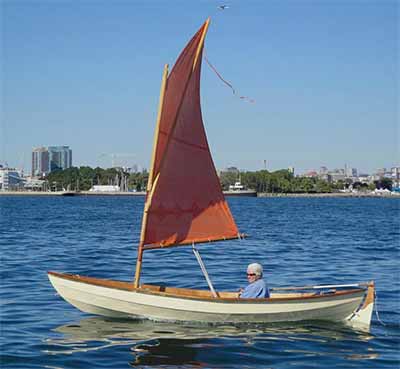 Because I thought it through carefully and chose well, I am very happy with my Skerry. It could not have been a better choice.

If you are interested I have a page that lays out the Steps to go through in deciding what boat to build. Wheather you do the steps formally or in a more relaxed way, the better you understand the right kind of boat for yourself, the happier you will be with the final product.

I have always liked being on the water and had canoed a great deal. I had also been brought up with a small motor boat. Safety in those days pretty much consisted of avoiding busy roads and not hitting your brothers. I was permitted to operate our little 3 hp Johnson motor boat at the age of 10. (As soon as I could get it started mostly). Along with starting the motor, being able to replace the sheared cotterpit after hitting a rock, was a necessary skill. We carried spare nails and bent them on with rocks when that happened.

Seeing what's out there was fun and important.

Deciding to build a boat was a gradual affair. I first figured out that there was a method of building called "stitch and glue". That led to various internet searches on the process. I ended up looking at Merten's d4, the Bateau website, and all kinds of cheap or free plans. Very exciting! I have links to many free plans. Here is the free stitch and glue boat plans.

I have a page of many links to boat plans both basic and sophisticated.

By then I was certain I wanted to build a boat. I was now deciding WHAT boat to build. 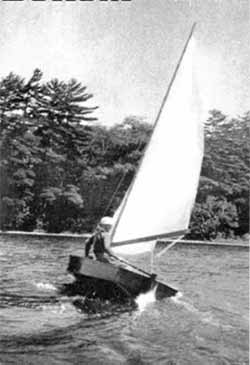 I got hold of a CD of free boat plans and seriously considered a sailing dinghy called "Conga". These were plans that had been published in 50's and 60's magazines and whose copyright had expired. The link is to the plans as offered by Polysail. Popular Mechanics and other magazines regularly published plans for various boats and these become available as copyright expires.

These old boat plans are dated when it comes to materials and construction methods but many are nice boats that could be built using more modern techniques and materials.

I was also still very interested in canoes. I have never clicked much on kayaks. I find them a bit restrictive and uncomfortable after a while. Fun for a short exciting ride but cramped.

I had crewed with a friend on her Wayfarer sailing dinghy and considered getting one. Fabulous boats, steady, safe and fast and quite fun to sail but difficult for one person to handle.

Crewing on various boats and trying out models you hope to build is a really good way of figuring out if you actually like the boat. Connect using facebook or some of the yahoo groups.

Sweety, although supportive and tolerant (Remember I eventually built in the living room!) is not much of an athlete and is not likely to ever be very interested in hanging out of a sailboat pulling on a jib sheet. This pointed me to a boat that could be handled by one person and occasionally 2. Although I could probably coax Sweety onto a keelboat, it is not likely that I could easily handle one safely any time soon! [NOTE] I have since then bought my Tanzer 22 keelboat, but Sweety is still not all that interested in sailing.

I made lots of little cardboard models and this helped me get an idea of how plans translate into 3 dimensional shapes. The models helped me figure out that I really don't much like the look of prams.

Don't get annoyed, I know they work well, and lots of people love them. The blunt not very pretty ends, are a great way of adding capacity and buoyancy to a boat, I simply couldn't love them! I was quite interested in the sailing canoe idea. 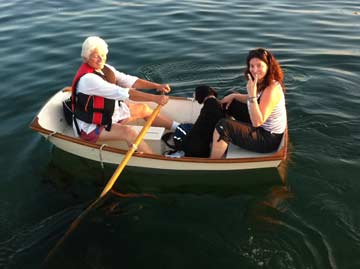 Later after I bought my Tanzer 22 sailboat, I built a little stitch and glue apple pie pram to use as a tender, cute and zippy and very practical.

One day I stumbled on the Chesapeake Light Craft Skerry and it was love at first sight. The Skerry was a boat that could be sailed with a simple rig, could easily be rowed, and looked fabulous. It had also been designed to be built by inexperienced amateurs. THIS was it. I had decided what boat to build. And so it began . . .

I bought the plans and studied them for a while. One of the real advantages in actually buying complete plans is that the designer will be there to answer questions and it is in his best interest to see you succeed. Free plans rarely provide any support except for a few popular models where there are support groups. 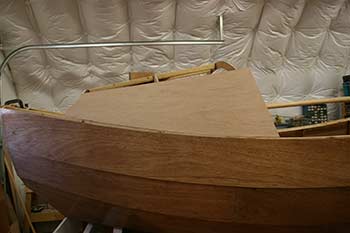 I am currently building a small sailing dinghy called a SCAMP, I'm having the time of my life.

This information is for general knowledge. Boatbuilding is rewarding but any building activity can be dangerous. Be careful. Do your research.

email me if you have any questions or if you find mistakes, I'll fix them and we'll all benefit: Christine

My Boatbuilding links and resources. I have a lot of articles and good information. If you plan to build a boat, check it out. Boat Plan Links Free Stitch and Glue Boat plans Free Canoe and Kayak Boat Plans Book listing fast and easily driven boats
Boats to Go: 24 Easy-To-Build Boats That Go Fast With Low Power

Building the Greenland Kayak : A Manual for Its Contruction and Use

Devlin's Boatbuilding: How to Build Any Boat the Stitch-and-Glue Way

The Canoe Shop: Three Elegant Wooden Canoes Anyone Can Build

Lapstrake Canoes: Everything You Need to Know to Build a Light, Strong, Beautiful Boat

Some boat styles: Dories, Faerings, Peapods, Skin on Frame such as Kayaks, Canoes, Multihulls, Ultra-lights, Take Apart and Folding Boats can be ideal if you don't have much space, Boats have even been made of Coroplast a corrugated plastic sheet.
My Boats