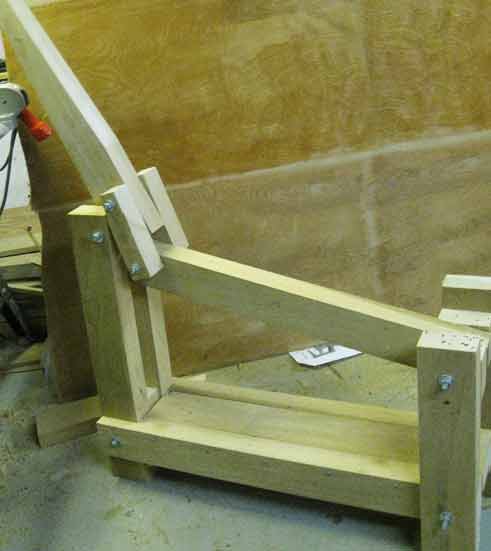 I ran across a compound lever press design on the internet made by Engineers without Borders, for use to make simple biomass briquettes. I made one just because...

This is an experiment making briquettes using saw dust and shredded papers (old banking reports and flyers, hopefully they will be more useful as fuel than they were as near junk mail)

I intend to use them in an experimental woodgas stove I built last year. I will then make some that can be used in a fireplace I'm getting next year.

A compound lever press is a press that combines the action of 2 or more levers to multiply the force applied. Read about my Compound Lever Press press here 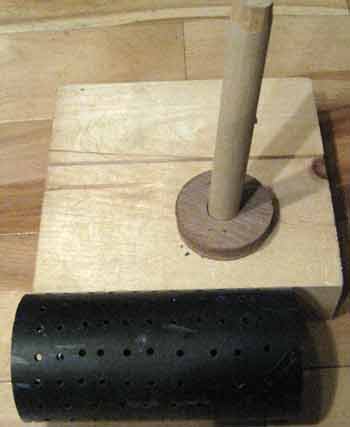 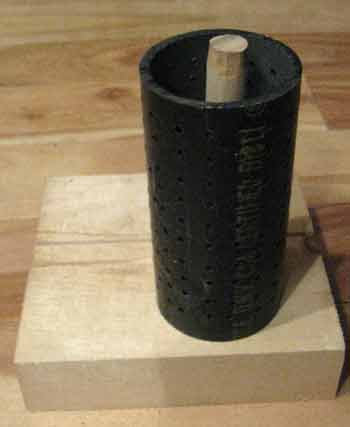 The pipe fits on top of a disk in which I have drilled a hole to set a dowel. I think a thin pipe would be better but I did not have any. I have nailed the disk onto a solid base.

I used a hole cutter to cut the disk from waterproof plywood but I think metal or plastic could be used. My cutter was a bit smaller than the diametre of the plastic pipe but I think it will work as an experiment. 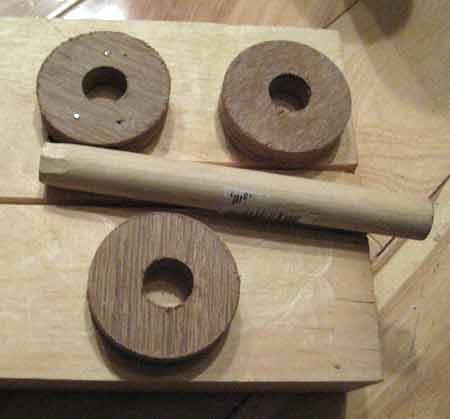 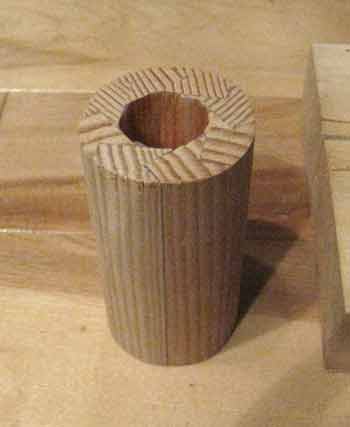 The plunger I have is a cut off from one of the masts I made. It is made using the bird nest method. I think I could make a perfectly usable plunger by glueing 2 pieces of wood each with a groove and sort of rounding it. 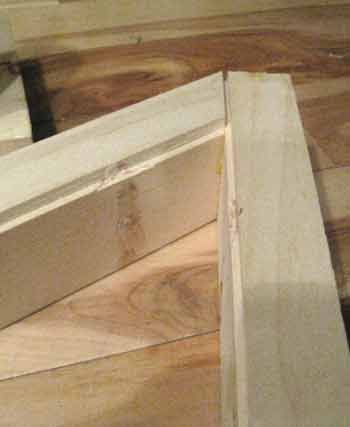 This jig on the left is used to remove the briquette. The little ledge is only as thick as the pipe and allows the briquette to be pushed out of the mould.

The material I'm using is old shredded bank papers and sawdust. I wetted my paper and added about the same volume of sawdust. The paper is what makes everything stick together. It acts as a binder.

Since of course I was impatient I tried making the briquettes while the paper was not really squishy yet.

In spite of that the brickettes held together but did not compact as well as they could have. The next day, my mix was wetter and mushier. It worked well and made more compact briquettes. I also tried adding just a bit of mixed flour and water and this made the mush stickier. 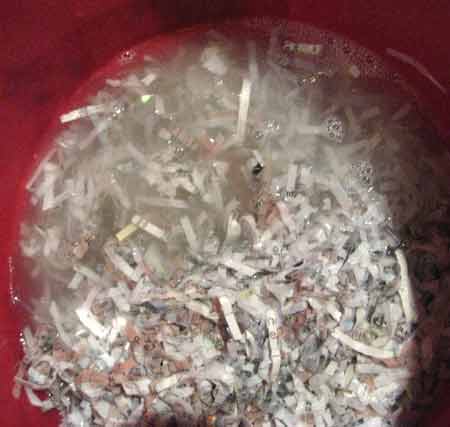 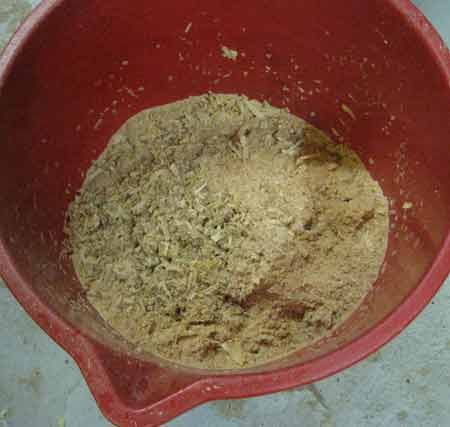 The mixture is easier to use if there is quite a lot of water. The goop can be just poured into the mould. Mine was a bit coarse because my paper was not completely softened but it was not hard to pack it into the mould. I put some mush, then a spacer, then more mush then a final spacer. I was then ready to press the lot and get the water out. 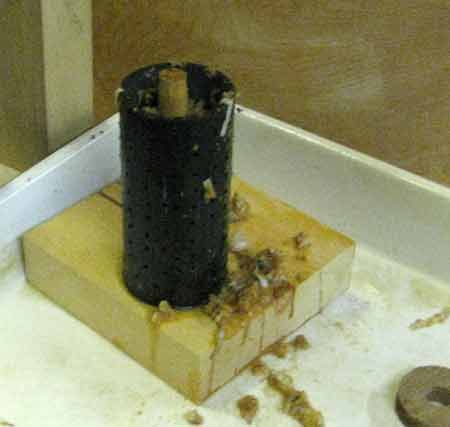 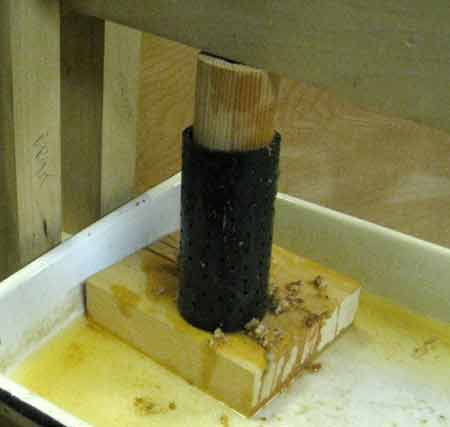 I pressed the briquettes and had lots of power even at the close end of the press. If I wanted more power I could press near the right but that was not necessary. I put the mould in a porcelain tray to catch the water. After a couple of trials I put a board under the front of the press to bring the water to the back and out of the way. 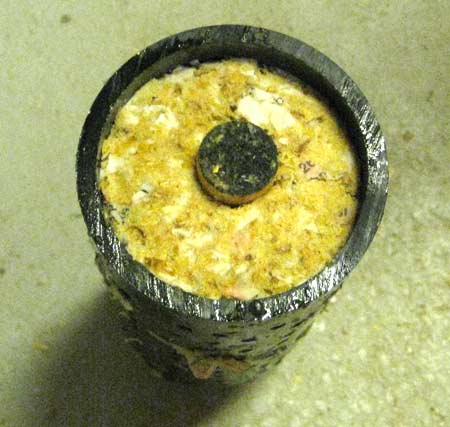 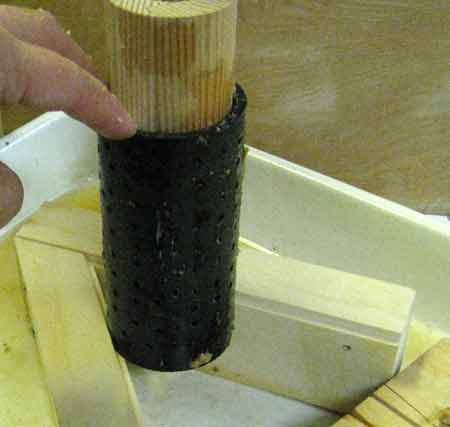 After pressing the briquette I looked at the bottom to see what it looked like. It's obvious that the pressing was good but the paper is not having the full binding effect it is supposed to have. I put the mould on the removing jig and pressed again to push the briquette out of the mould. It came out easily. 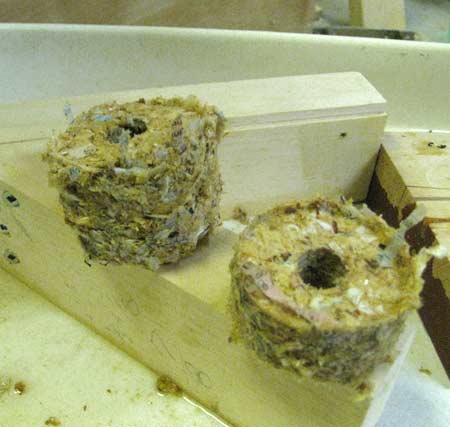 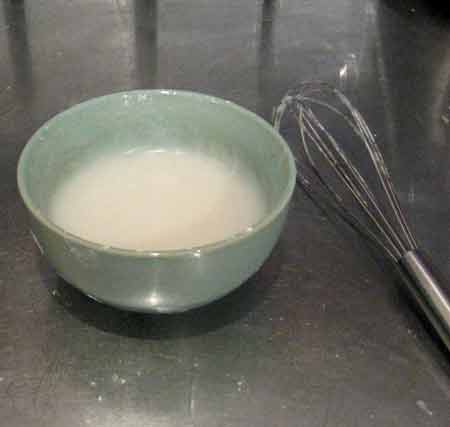 My first briquettes!! They are quite spongy and light. The next day I added a bit of water and flour mixture to the slurry and got much denser briquettes. They are heavier and harder than the first. The paper is still not completely pulped but much softer than the previous day. I think 2-3 days would be about right. 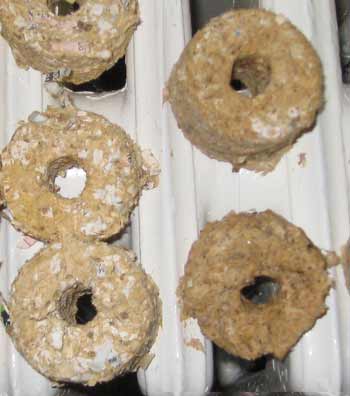 Everything is sitting on the rad drying. The first lot on the left is bone dry and very spongy and light now. The paper bits are clearly visible The second batch on the right after a full day is still quite damp and much harder and denser. They are also less furry than the first lot with fewer bits sticking out. There is less paper visible. 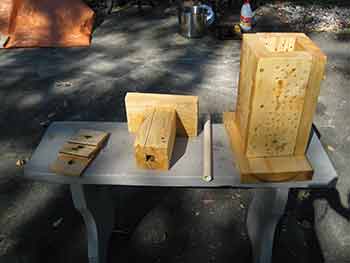 The briquettes I was making were fine but time consuming and lightweight. I decided to try and make them larger and more dense.

Because the press only presses a few inches at a time I decided to make a wider mould rather than a higher one which would require a different press. I made it out of 2x8 scraps I had left over from making raised garden beds. I also made it much stronger so I could press on it with more force. 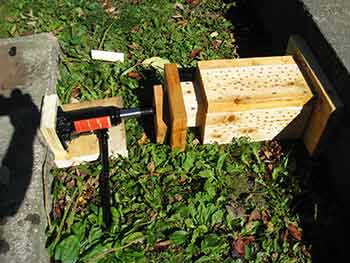 The square mold was limited in height to how much I could put in the press. But first I tried compressing it using a car jack. I happened to have a cement pedestal near a cement wall and I pressed briquettes between the 2 using a 2 ton jack. It worked but it was very slow. The briquettes were denser and heavier but not as dense as firewood. 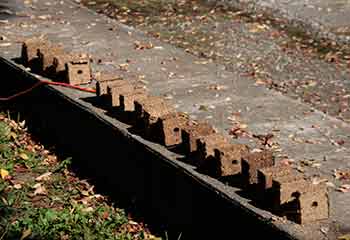 I then tried making them using the press. This worked quite well and I was able to produce 35 in one hour. I made some with and without holes. The ones with the holes start burning faster but even the full ones are not hard to light so there is no need for a hole. In the end I made about 100 in a day. This sounds like a lot but you burn about 10 an hour so it only lasts for a couple of fires. 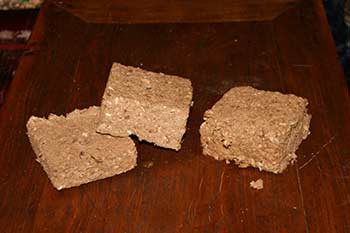 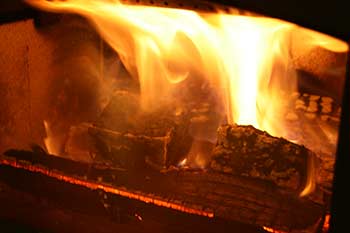 Square briquettes ready for a burning test. Lots of quick heat but they don't last very long. Eventually I kept my briquettes for starting the fire, or for getting it going if I had let it get too low for wood to start up.

There is a limit on how thick I can make each briquettes. Even by filling the mould it crushes down to only a fraction of the height. The press only presses about 6 inches so it is not possible to make the mold much highter. Maybe a much larger press would work better.

I have now made many batches of briquettes using sawdust, paper and dried leaves in various sizes and shapes. The easiest are the square ones with no hole. They all work quite well. The BUT in the end the story is that it is time consuming, and each briquette does not give off a lot of heat. It's not surprising. If you compare a log of wood with a pile of briquette of the same weight. The pile of briquettes is quite large. To get the same amount of heat out of briquettes as out of wood you need a much larger volume for the same weight (Weight for weight briquettes give as much heat as wood but is much bulkier).

What the briquettes are brilliant for is starting a fire. There is no preparation needed. Put a bit of paper down, place a small pile of briquettes and put your wood on top and the fire is good and started.

Of course IF all I had to burn was sawdust/paper and leaves, then briquettes would be a great alternative.

Wikipedia article on biomass briquettetesBrickette making in Congo helps prevent Gorilla Habitat damage.Press made from a jack, Youtube VideoAnother Jack Press that makes 25 square briquettes at a time.Another style of press from the same guy as above.

I don't claim to be an expert in anything. If you want to build a press be careful. Enjoy!