In this article a houseboat is a motorized (or otherwise powered) boat, that is not permanently attached to shore, and which can be used for cruising in quiet waters. There is also the possibility of cruising to a pleasant spot, mooring the boat and staying in one spot for a while. When the mood catches you you can take off and find another nice spot to explore.

Although people live happily on keel boats, multi-hulls and other large yachts, they are primarily cruising boats which can handle heavy seas. Usually their primary function is sailing or cruising. Houseboat's are primarily floating homes that can cruise in QUIET water more or less efficiently.

In Europe, there is a well established tradition of living and cruising in the existing canals. Canals built in the past, as busy arteries for commerce, have become popular houseboat habitats as transport of goods shifted to railways and trucks. Anywhere there are old canals and quiet rivers there are houseboats.

Because of the weather, living on houseboats is more popular in areas that are not frozen solid for months on end. Thus Scandinavia, Northern Europe and North America have lovely canals that are mostly of interest in the warmer seasons.

During the summer, river boats and small cruise ships and houseboats take great pleasure in traveling up and down the various rivers and canals. The following are links to cruises that are offered in the more northern areas. I don't get any revenue from these links, they are just for interest. They are in Scandinavia, Scotland, and Germany. There are also a couple of links to the Rideau Canal in Canada.

Canals that are still in use for maritime traffic and freight tend to restrict pleasure cruising and houseboats traffic so going on a commercial cruise is sometimes the only way of visiting these canals. These canals are often quite busy with very large ocean going ships and sometimes a bit of a challenge for smaller boats.

In areas where the climate is gentler, or at least not frozen solid, hardy people have chosen to live on their boats year round. There is also a large number of boats used for touring or just as bed and breakfast hotels. This is common in Paris and in many Dutch cities. 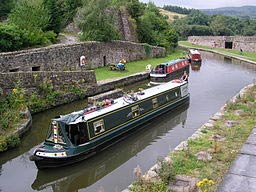 The UK has an extensive canal system which are populated with all kinds of pleasure and residential boats. Narrow boats are a common sight. They are so named because they need to be 7 feet wide or narrower to fit the many locks in the system.

These narrow boats are the descendants of the original transport barges, which were the lifeblood of commerce before railroads took over. Here is wikipedia's page on British Narrow boats

Few people choose to live on board year round and a whole industry has come about renting out boats for canal cruising. Here is a link of such a company: Boating Holiday, operating in Europe.

Living on Board Year Round

Unlike cruising on the ocean in a large yacht, you will seldom put your life in great danger. (I don't underestimate the ability of idiots to get in trouble but there are fewer dangers in a boat that is never far from shore.)

Like cruising on the ocean, you will need to pare down your belongings and get used to living with your family close by. Although it is easier to provision, there are long stretches with no stores nearby and those nearby are often at inflated prices catering to tourists.

Like in any boat, unless you have a deep pocket, you will need to develop lots of maintenance skills and a familiarity with new tools.

Depending on where you are you will likely need various permits and certificates. In Canada you will certainly need your boating and Radio cards. Elsewhere boat permits and registration are often necessary, plus mooring fees will apply. 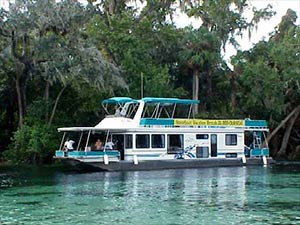 The style of the houseboats will depend a great deal on regional variations. If they are to be used in narrow canals and locks then the width is limited by the proposed waterways, gates and bridges. If the waterways are wider and higher then larger wider boats are possible.

There are a great number of styles available. Traditional looking boats take their inspiration on old canal barges, besides the Narrow boats found in the UK and Penichettes found in France, Holland and elsewhere more modern house boats are also made. In North America we often expect houseboats to be on pontoons or wide shallow hulls, since the routes available are often wider and higher than European Canals.

At the most basic, 2 pontoons with a caravan camper structure on top is all that is needed. At the most elaborate end, the boat can become very luxurious yachts indeed.

A quick search on Kijiji brought results for house boats ranging between $7,000 and $519,000 Canadian.

Houseboats usually have a shallow draft and often low free-board. To maximize living quarters the upper structures can be quite high with makes for high windage.

Houseboats are built for their space, headroom and comfort not for speed and sailing ability. As a result gas mileage tends to be poor, sometimes as low as .5 Miles per gallon, to middling and maneuverability is somewhat restricted. The small freeboard and high structures make the houseboat unsuitable for wide crossings where there might be largish waves and high winds.

Houseboats can be as simple as buying a few plastic barrels, making a wooden frame for them, and putting a wooden structure on top with a simple outboard motor at the back. I once saw a very funny photo of a bunch of guys who had rigged an old camper on some used pontoons and had taken off on a fishing expedition complete with beer and lawn chairs. House boats can be as complicated as building the wonderful Bolger Estuary Cruiser. See the epic Wooden Boat Forum thread.

House boats are powered many different ways but mainly either with a diesel motor or with 1 or more gas outboard motors. It is not unusual to see 2 motors on wider and pontoon boats, to improve handling.

Companies will sell you just pontoons Build a Boat Pontoon or U-Fab in Canada, Or American Pontoon Co in the US.

If you live in the UK you can contact The Liverpool Boat Company for an Unfinished Hull-Only Narrowboat. which you can finish at your leisure.

Many of the plans available for houseboats provide instructions for pontoons or shallow hulls made of plywood and epoxy. Here is a link to my page of House Boat Plans

On the Canadian Side of the Niagara River there is a small stream called Black Creek. It's a lovely river to kayak and many people have built cottages along the banks. Docks have a small bracket to store small outboard motors, I thought, until one evening coming back from a paddle I noticed several docks being motored around with family happily lounging around on their "boat". I can only assume that it is not legal to build a true dock on the river and as a work around people have instead built "boats" that can double as docks.

email me if you find mistakes, I'll fix them and we'll all benefit: Christine that you can kit out to your heart's content. (Or Pocketbook.)
All about houseboats.com is a US site and has lots of info on routes and boats.
Houseboat building in Australia.

Shantyboat: A River Way of Life

Atchafalaya Houseboat: My Years in the Louisiana Swamp

Diesel Engines: A Boat Owner's Guide to Operation and Maintenance

Marine Plywood Grades used in Boatbuilding Stitch and Glue boatbuilding method. How to decide what kind of boat to build

I don't claim to be an expert in anything. If you want to build one do your homework first.